The Klein Tools MM6000 is mostly known to be the most trusted digital multimeter by professional electricians. The Klein tool has one best and unique feature which all electricians need. This is the auto ranging feature which is effective for testing and troubleshooting.

The device is properly built in size and shape with ribs on either side of the device to enhance proper grip. The Klein Tools MM6000 can be used for various purposes. I.e. like testing and measuring the voltage and frequency of different electrical gadgets.

The device also measures voltage and DC/AC. This tool is also able to handle resistance to the highest limit of 40M with a highest capacity range 4000uf. 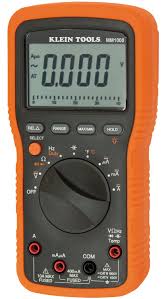 This unique device has a variety of important features that distinguishes it from other devices of the same kind. Find more details about the product by reading through this review.

The backlit is very bright and uniform across the display. The display of the device covers the top third of the multimeter and has large digits and 3999 count resolution. The screen is fine when viewed off square, where some other meters might wash out. The sample rate of the reading is three times per second

This feature shows relative readings between a previously stored value and a present reading and displays it on a plus or minus value. With this feature, one is also able to test the capacitance/resistance component by zeroing the multimeter then removing the natural resistance from the test leads and probes.

A type k banana thermocouple comes with the Klein MM6000 for measuring Fahrenheit and centigrade. This feature is good for general temperature measurement. It is however not very precise so should not be relied on for precise values. The accuracy of temperature is given or take 3%.

The Klein Tools have rather well-built designs not to forget the MM6000.The Klein tool has a nice body which has been protected by a rubber hostler. Also when the meter is turned, there is the solid dial selector which has the solid tilting bail and lead holder.

The Klein MM6000 features a bar graph underneath that shows an analog representation of the current read out.  It covers the full-span of a given input range and has much higher resolution/refresh rate than the digits. In short in this Klein MM6000 everything is well laid out with intuitive units on the nine position dial selector.

Q: I wanted to find out where this multimeter is made. Is it a USA product or China made product?

A: I have this multimeter, and if I’m not wrong, the device is made in Korea.

Q: Does this multimeter measure micro farads? Anybody who has used the device at home?

A: Yes it does. This multimeter tests even nano farads. I love this multimeter because it can also be used to test diodes and continuity.

Q: for those people who have used this multimeter, does it come with a magnetic holder?

A: Unfortunately, this multimeter doesn’t have a magnetic holder. However, it is the best product that I have ever used.

From the Klein MM6000 review I was able to gather information, and from my on findings, that information leads to certain conclusions. The Klein tool is a hundred times better than the fluke multimeter. It has a lot and unique features making it better than the other ones.

It has good qualities which outstand the other multimeters. In addition, there are useful extras, such as Klein tool carry case that will hold the meter, probe leads and thermocouple set. If you are looking for a multimeter to buy, then consider this one because it has everything one can dream of having.

The Evolution of Multimeters: From Analog to Digital

5 Tips For Choosing The Right Multimeter

Electric Knife – A smart kitchen appliance for the home

Product reviewer & passionate blogger. Beside writing for this blog, I spend my time crafting research based contents for HuffingtonPost, Lifehacker & Forbes!

Sign Up Below and We'll Send You Our Latest Update Right Away: